60 or 90 wonderful kilometres cycling through the capital city

At VeloCity – The Power of Berlin. cycling event, an attractive circular course awaits you: that means 60 or 90 kilometres through the German capital without having to watch out for car traffic.

At VeloCity – The Power of Berlin. cycling event, an attractive circular course awaits you: that means 60 or 90 kilometres through the German capital without having to watch out for car traffic. You'll get everything you need to delight the cyclist's heart. Off you go, onto the course!

The cycling event for everyone starts off in the shadows of the Brandenburg Gate in the direction of the Victory Column. From there the Goldelse golden statue will send you westwards along Otto-Suhr-Allee, Spandauer Damm (passing the Charlottenburg Palace) and up Charlottenburger Chaussee towards Spandau. At the historical fortification Teltower Schanze (about kilometre 10), you will experience a sharp change of direction to the south.

Rejoice! Because you are now approaching an absolutely wonderful section of the course: the spectacular Havelchaussee. This is considered the cycling hotspot in Berlin and runs along the Havel River. But the Chaussee is not only exciting because of its water views, it also includes the highest spot on the course at the so-called "Willi", the Emperor Wilhelm I Memorial Tower. Not only that, but in 1987, the Karlsberg hill was also the site of the mountain classification of the Tour de France, which started here in what was then West Berlin. After about 21 kilometres, the southernmost tip of the course is reached.

Another prominent Berlin cycling route, along Kronprinzessinnenweg and Hüttenweg, give you the chance to really put the pressure on your pedals. After a few brisk kilometres, your route heads south again along Onkel-Tom-Strasse before abruptly turning east. Argentinische Allee leads you past the Free University of Berlin into the villa district of Dahlem, where you will have about 30 kilometres under your belt. About one and a half kilometres further on, on Königin-Luise-Strasse, you will find a refreshment point—where you can appropriately fill your energy tank at a petrol station.

Refreshed, the route continues past the Botanical Garden and Steglitz Town Hall. Steglitzer Damm takes you to kilometre 36. Here your path takes another turn, heading north towards the Tempelhof district. To the right of your handlebars you will see the repurposed Tempelhof Airport, whose former runways are now used as a park and leisure area. Incidentally, the buildings of the airport grounds serve as an EXPO area for sports events such as the BMW BERLIN-MARATHON and the GENERALI BERLIN HALF MARATHON, which, like the VeloCity Berlin, are organised by SCC EVENTS.

Regeneration after the bike race

Now Katzbachstrasse takes you into the Kreuzberg district, past the namesake Kreuzberg hill in Viktoriapark. To your left, the park at Gleisdreieck slowly creeps into your field of vision. On the wasteland of the former Anhalter and Potsdamer freight stations, you will find capital city dwellers engaging in sports or chilling in the evening sun. Maybe this will make a spot for you to regenerate after the cycling event. But first you have to keep going, always north, past the German Museum of Technology, over the Möckernbrücke, passing the Tempodrom, focusing your attention on the world balloon.

Highlights of the course

The world balloon is a helium-filled balloon with a world map printed on it that rises with its guests to 500 metres for a perfect view. Just before you reach the balloon, turn right into Kochstrasse. Here you will find yourself in the immediate vicinity of the former border crossing Checkpoint Charlie (at about kilometre 44). Via Moritzplatz, you'll find yourself in the heart of Berlin's nightlife. Past clubs like Kitty, Sage and Tresor, you will reach Strausberger Platz, the easternmost point of the course, after the Michaelbrücke bridge. 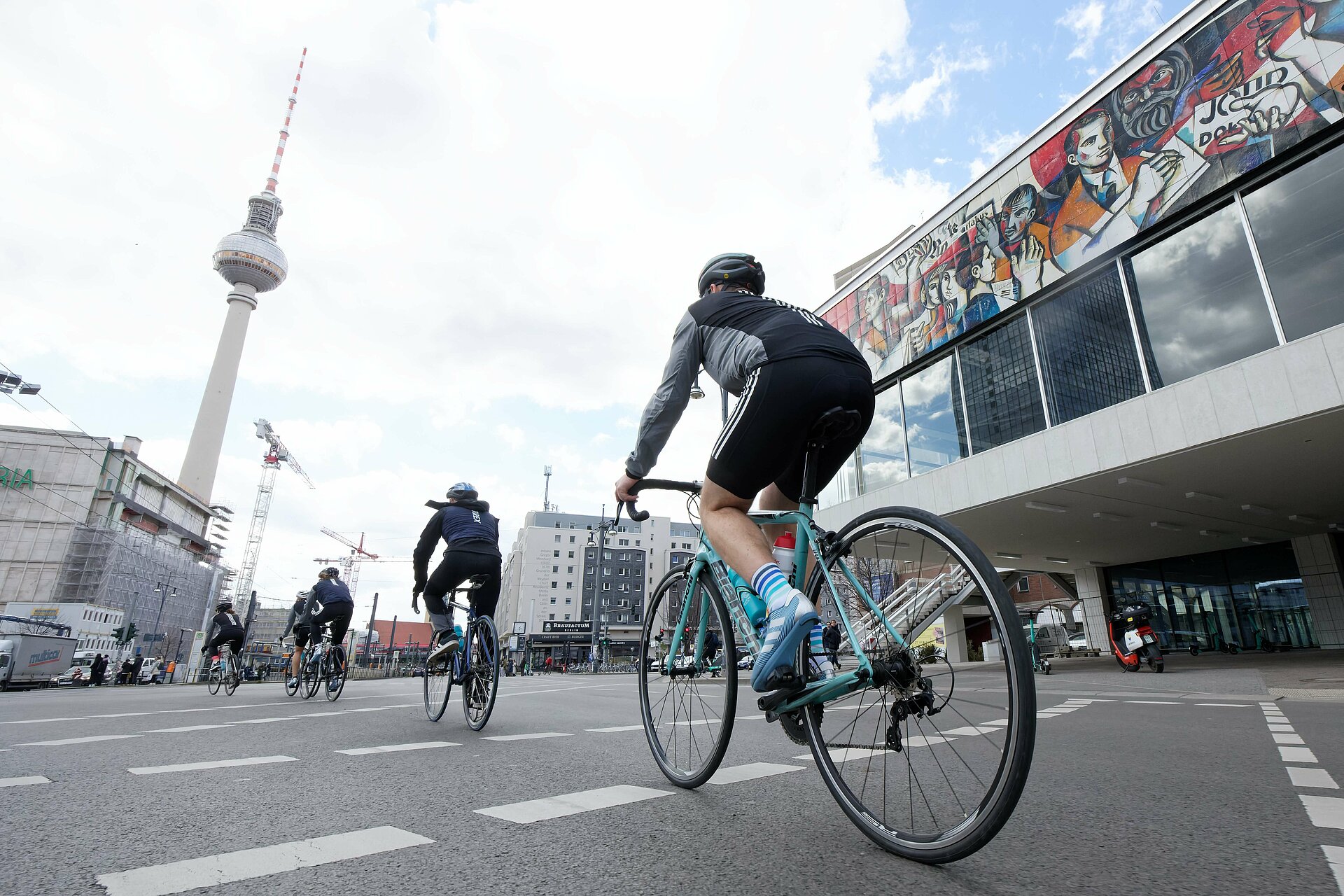 The monumental Karl-Marx-Allee follows with all its socialist "charm", the Berlin TV tower always in view to the left of your handlebars. If you want to speed up, you'll have to really push on the pedals, but if you want to enjoy the architectural spectacle of Berlin, you'll can just let it all sink in. After a right turn, the SoHo House marks the beginning of Torstrasse, where tourists, hipsters, ad men and women and other creative people meet in cafés. Your pedals will take you along the legendary Friedrichstrasse to the Friedrichstadt Palast. This revue theatre with one of the largest stages in the world clearly signals that you are heading west.

Grand finale at the end of the route

Along the Spree River, leaving the Futurium and Berlin's main railway station on your right, you will return via Moabit to the Siegessäule (Victory Column), where you will begin your 60-kilometre finish with a view of the Brandenburg Gate. The 90-kilometre route takes you past the Siegessäule once again to start an excursion into the north of Berlin. Via Beusselstrasse and Saatwinkler Damm, the course leads along the old Tegel Airport up to Tegeler See lake, where it turns back south. Accompanied by a lot of water, you move back to familiar asphalt toward the Siegessäule. From there, after a trip along the grand boulevard Strasse des 17. Juni heading west to Ernst-Reuter-Platz, you turn 180 degrees for the last time to enjoy the final metres to the finish in front of the Brandenburg Gate.

Volunteers wanted for VeloCity - The Power of Berlin.

We are still looking for volunteers for the VeloCity Berlin! It's easy to get involved and experience VeloCity up close.

On July 3, 2022, a new race for cyclists will get underway on Berlin's streets. The event, which is open to everyone, is themed "VeloCity - The Power of Berlin.

In a speedy frenzy

The thrill of the new course

The fastest night in Berlin turns 30