The thrill of the new course

Be part of the action when the adidas Runners City Night celebrates its 30th anniversary with a new course.

Be part of the action when the adidas Runners City Night celebrates its 30th anniversary with a new course.

The main hub remains at Breitscheidplatz with the charismatic Kaiser Wilhelm Memorial Church as the visual highlight. This is where the start and finish, the party village and the stage are located. And the Ku'Damm asphalt will once again be set on fire by thousands of running shoes and inline skates. But the experienced city night runner will have one surprise on the evening of July 30 when the course does not loop back to the Zoo via Kant Strasse. Instead, the 10 km course will be completed on a new star-shaped route. At Adenauer Platz, the new hot spot, you turn into Lewishamstrasse shortly before km 2. Continue north on Kaiser-Friedrich-Strasse to the turnaround point just past km 3. After a 180-degree turn, return to Adenauer Platz at a brisk trot, then after a sharp 90-degree turn head down Ku'Damm toward Halensee. Just past the halfway point, another rapid U-turn approaches, and the course leads back to Adenauer Platz on the southern lane of the grand boulevard. The next detour along Brandenburgische Strasse ends just before Fehrbelliner Platz, where you make a final U-turn. After you have passed Adenauer Platz for the fourth time, you will have plenty of time to celebrate your personal euphoric finish down the middle of the glowing gate at the Memorial Church during the last 1.7 km. Feel the running and skating community celebrate you. You are a star!

The new turning point scenario has the great advantage that you can always keep track of what is going on in front of and behind you. You can keep an eye on your competitors, casually greet your running or skating friends on the opposite side of the street or make eye contact to your heart's content with any like-minded athletes whose hearts are also beating faster. 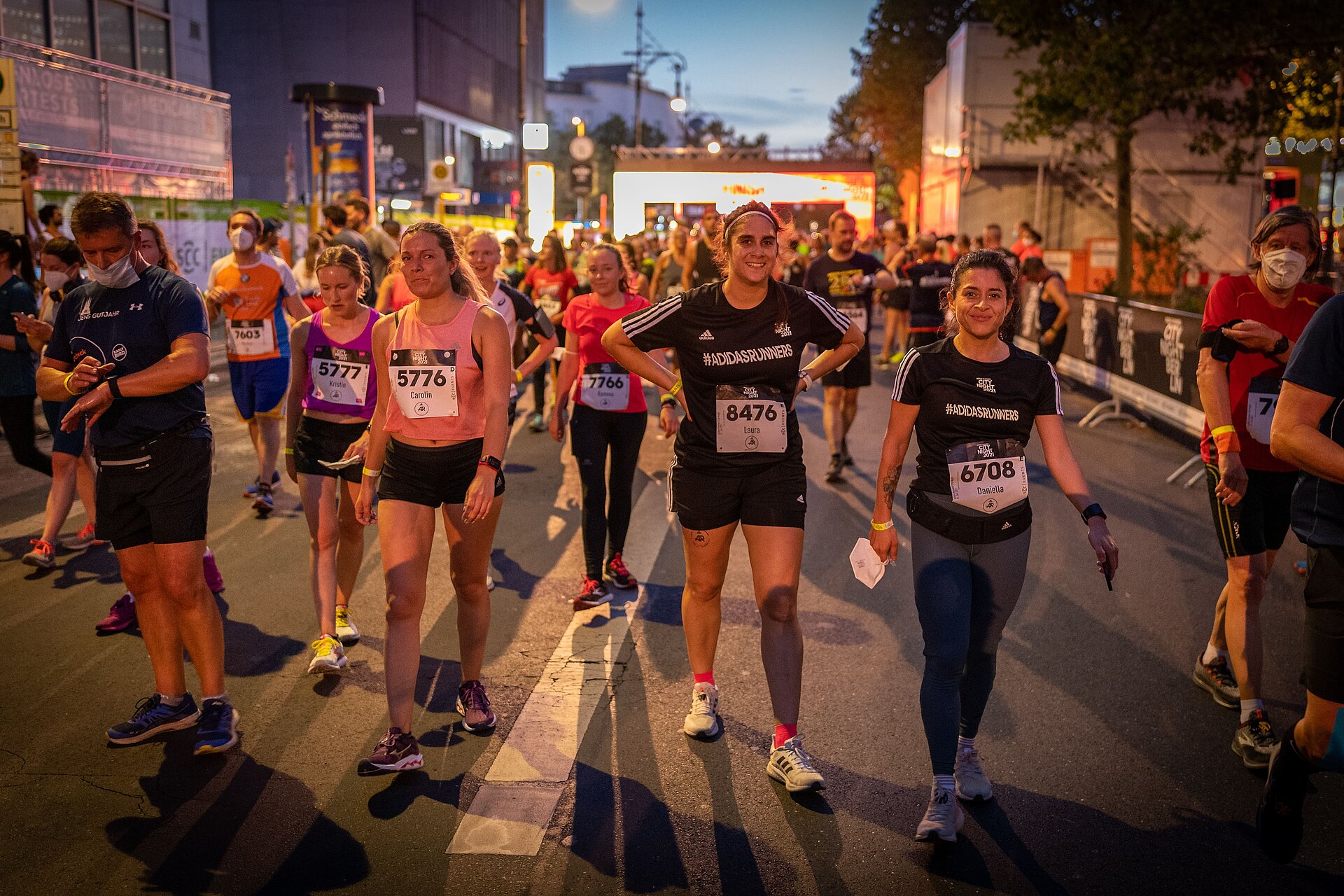 The largest part of the course still goes along the Kudamm. The adidas Runners City Night takes place where people enjoy their evening strolls—past flag stores of well-known labels, boutiques of the big designers and restaurants of various nationalities. Multi-culti and a light touch of the metropolis are the order of the day. Nearby are some of Berlin's famous tourist attractions with the Zoological Garden and Aquarium, KaDeWe, Theater des Westens, Quasimodo and the Paris Bar.

The Schaubühne theatre at Lehniner Platz shortly before km 6 has been offering hip productions since 1962, and the trendy Thai market in Preussenpark at km 7 is a relatively new location for fancy culinary delights in the middle of the residential district of Wilmersdorf.

The absolute No. 1 tip for fans and supporters is Adenauer Platz. The wonderful, crazy crowd of athletes will rush past four times at the new epi-center of the City Night course. Applause, cheering & thrills: You an abundance of it all. But along the rest of the course on Ku'Damm, samba bands and motivation zones filled with cheering spectators await you as well. 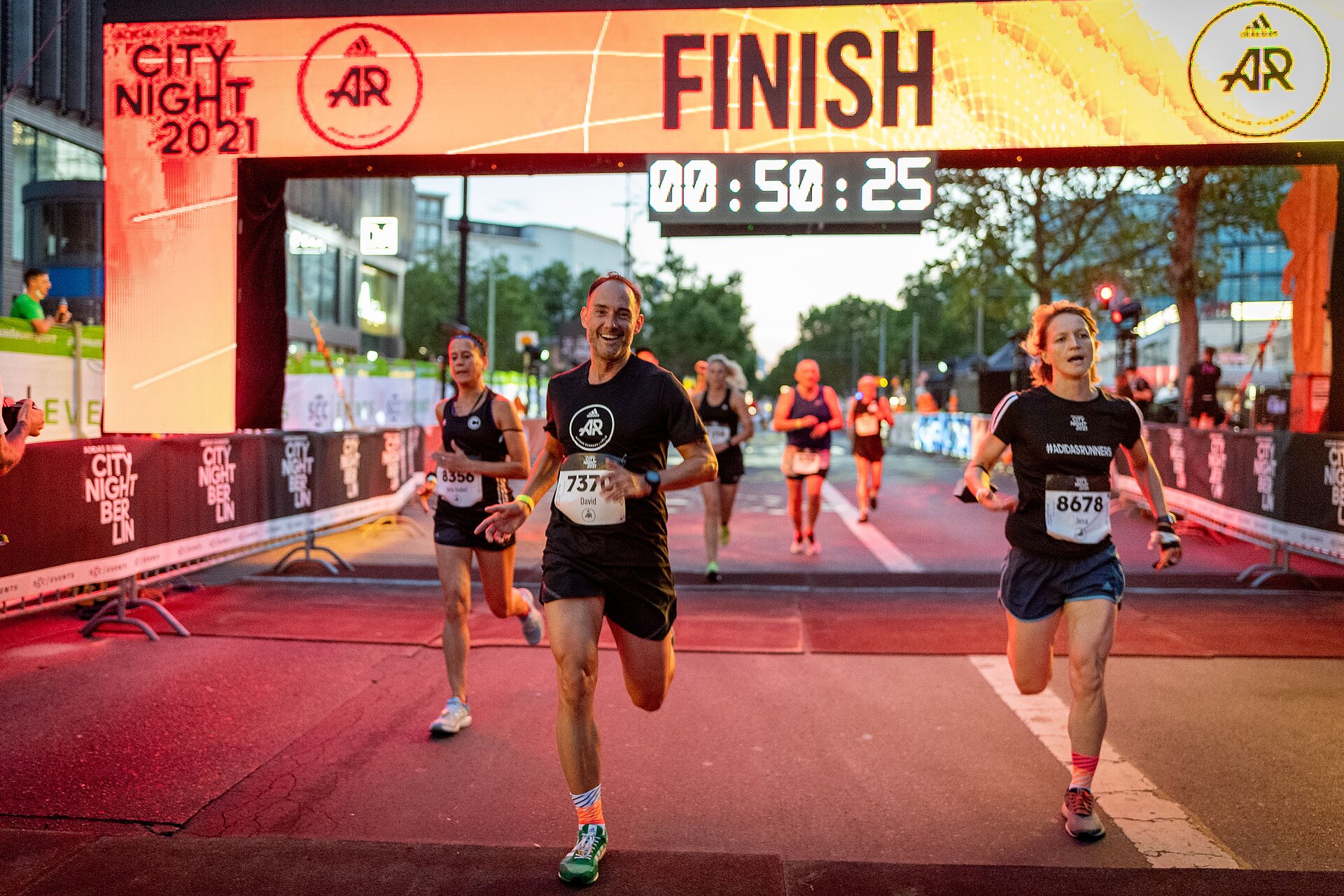 Destination of your dreams

Arriving at the destination of your dreams, the backdrop for Berlin's fastest night becomes even more attractive. Even though there are now new buildings, Zoofenster (118m) and UPPER-WEST (119m), with their unique facades and glass fronts that tower over the Kaiser Wilhelm Memorial Church, the latter is still the central characteristic building for the adidas Runners City Night. The start, the finish, the event logistics, the party village and the stage: everything nestles around the church, which was inaugurated in 1895 and destroyed in a bombing in November 1943. In 1961, the new Memorial Church with its blue glass walls was opened. The population in the western part of the divided city protested so vehemently against the planned demolition of the old, damaged tower that the famous building was preserved as a landmark and memorial.

Don't miss any of this and come celebrate the 30th anniversary of the adidas Runners City Night and the new course with us. We are looking forward to seeing you!

60 or 90 wonderful kilometres cycling through the capital city

At VeloCity – The Power of Berlin. cycling event, an attractive circular course awaits you: that means 60 or 90 kilometres through the German capital without having to watch out for car traffic.

On July 3, 2022, a new race for cyclists will get underway on Berlin's streets. The event, which is open to everyone, is themed "VeloCity - The Power of Berlin.

In a speedy frenzy

The fastest night in Berlin turns 30

Volunteers wanted for VeloCity - The Power of Berlin.